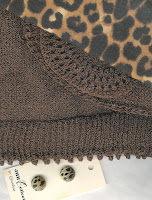 Been pretty busy lately, working on No 49, our next issue - it’s our summer publication and is always the most popular, first one to sell out - I guess because new subscribers almost always order a back issue or two and most often, they pick a summer one, maybe because they live in a warm climate. Probably looking for lightweight stuff, I guess - don’t really know, but anyway - summer it is, and actually for me, the most difficult. We don’t get really hot weather here and it will usually only be in mid-afternoon, so not worth too much worrying about. Anyway, I’m sure you’ll be happy with what we have - hint - this issue is all about options - intended or otherwise... tell you more about it later!
I’m supposed to be finishing up an article right now on successful yarn substitution and it’s almost finished, but I needed to take a break - actually, other thoughts keep intruding! Hope the boss doesn’t find out! I’m also - in my spare time - working on a few extra things for the seminars at the end of April.
I’ve always been secretly attracted to animal print - I say secretly because it seems sort of trashy - you know like you see some blonde bimbo in a comedy sketch or in a country music video, with tight pants, too tight leopard top and a cigarette, in a double-wide...on ‘What Not To Wear’, there's some poor lady with leopard pants and a furry leopard jacket and you kind of die inside for her because you know what they’re gonna say! I do have a pair of skin print pj’s that I got from VS a long time ago that I still love! and on my recent trip to MSP, I picked up a leopard (??) print cami. You might remember, last Fall I got the cutest animal print pumps that went perfectly with an outfit I’d already made. It’s been winter here for a long time, so they’ve been hanging on a shoe rack on the back of the door to my sewing room...oh, and another confession, my glasses have a tortise-shell frame that's kinda the same thing!
Now,way back in 1996, I bought these sweet skin print buttons, on sale - I was going to knit something to go with them. I did knit a fairisle skin print - not sure what animal it was - that I cut’n’sewed into a vest. By the time it was finished, I decided the buttons would be overkill and had put them away for the next time skin prints made a comeback.
Now, back to knitting - I get a germ of an idea and I play around with it. I saw a cute little cardy last year with a double ruffle on a deep vee neck that’s been in the back of my mind since then. I actually took that idea and somehow it turned into a cardy, yes, with a deep vee neck, yes, but the ruffle ended up as a peplum thing below the waist and around the bottom of elbow-length, fitted sleeves. Totally cute and I love it! But that double ruffle was still playing in the back of my mind. So, to divert my mind from the writer’s block, I began experimenting with this ruffle idea again.
Here’s what I’ve got so far - 3 new edges!!!you’ll have to wait to see the end of the story - will it be in No 49 or be held over for No 50? will I use the buttons or save them for the next time I get an animal notion?
Posted by Mary Anne Oger at 4:13 PM No comments:

Fleetwood Mac was amazing!! My friend Donna, and I drove down to St Paul, MN for the concert on Tuesday night - well, actually we went Monday, shopped Tuesday, took in the concert Tuesday night and came home yesterday, a great winter break!
Stevie Nicks looks great, hard to believe she’s 60!!! We loved her costume changes - she had on very high red boots and a black dress throughout - she used several shawls - one was gold, one was red and a black one too!! she didn’t do much moving or dancing, but did a lot of twirling, flipping and playing with the shawls, back-lit, centre stage - very girly-girl - we weren’t close enough to see what they were made of, but the gold one, I felt sure, was knit. Her voice has that great raspy, gravelly tone, even better than her younger days, that I love. Lindsey Buckingham was absolutely incredible - he worked it every second of the full 2 hours the band played. The drummer, Fleetwood, also put everything he could into the performance.
We got to lunch with my friend Mar, in MSP - she took me to a really great yarn shop called ‘Skeins’ in Hopkins - definitely worth a visit if you’re in the area!! Be prepared to splurge!!! And she'd made me a personalized, knitted tote bag - I'll bring it to the spring shows.
For any Canadians who know what it’s like coming back through the border, after a shopping trip, you might like this - you’re driving up to the Customs window - even if you haven’t over-bought or anything, there is still that little guilty feeling of doing or saying something wrong and the fear of them catching you doing something you shouldn’t have...and you never seem know if you’re under your allowable limit - well, we know, but hope we’ll get through without having to pay or worse, a search of the vehicle...anyway, at the window, I see a nice, older guy I recognize - he never acknowledges that he ‘knows’ me, but is always polite and says something pleasant at the end. He asks us our names and where we’ve been. Donna says Minneapolis which is how Thunder Bayers think of a trip to the Twin Cities, but I put in ‘St Paul’ because that’s where we actually stayed, right across from where the concert was. He asks what we’re bringing back and we both say our amounts, a few dollars over the allowable. Then, he says, ‘and the most important thing..’ and pauses - we both hold our breath, wondering what is coming??? He says, ‘how was Fleetwood Mac??’ Thrilled, we both told him how great it was - he asked if we’d go again - hell, YES!!
Safe drive, he says as he closes the window!
Posted by Mary Anne Oger at 12:25 PM No comments: