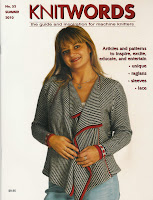 Just got No 53 from the printers! Wow!! I hope you like it as much as I do!
This is my beautiful daughter-in-law, Agnieszka, (yes, she's the Mom of Nathan and Rhiana) on our cover, in Nancy Roberts’ design. I really liked this cardigan the moment I saw it and as I proofed Nancy’s pattern and read over the various techniques she used so cleverly, I liked it even more. I called it ‘The Chronicle’ after that old joke about what’s black & white and read (red) all over...
We have a great variety of knits in our Summer 2010 issue:
- A mid gauge oversized pullover from Susan Guagliumi using the bridging technique from her new book, ‘More Hand-Manipulated Stitches for Machine Knitters’ - hope her pattern and article will inspire you to get your copy soon.
- A new designer, Alice Tang, whom I met in San Fran last fall - she has some great ideas and her ‘Rib’n Shrug’, done on the bulky machine with ribber is sure to be a hit - it could also be done on the mid gauge, but I’m going to use the schematic and try it out on the standard gauge (hope this is not an idle promise).
- Mar Heck, in addition to her regular 'Do It In DAK, came up with a great collection of scarves, not only to get you ready for gift-giving, but they are good learning patterns as well as great stash busters!
- Eileen Montgomery has our most summery features, a very cute cotton top if you want quick and easy, and a nice, short-sleeved cardi in lace with a tie neckline.

That’s all for now, I gotta get finished packing up for the mail out tomorrow!
Posted by Mary Anne Oger at 5:08 PM No comments:

The colour Purple - NOT! 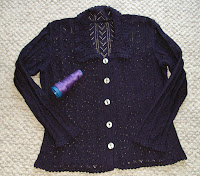 'Purple Purls', in No 52 KNITWORDS, is a beautiful lace cardigan with some really nice details, not only a pleasing stitch pattern, but the bands and collar are pretty nice too, if I do say so. The yarn is Yeoman’s Cannele which I have used extensively (I get it from Cardiknits at www.cardiknits.com) - it is a crisp, mercerised cotton that has a lovely sheen. In reality, bright purple is not a colour that I would choose for myself. I had been wanting a plum shade, ordered ‘iris’ which turned out to be more of a bright royal blue - see ‘Spots in Dots’, No 50. My next order was for ‘aubergine’ which didn’t thrill me either - it was more reddish wine than eggplant - and I traded it sight unseen, by mail, with a friend in exchange for ‘cardinal’. My friend had described ‘cardinal’ as a really pretty purple - when it arrived, I kind of grimaced and looked at it for several weeks before gathering up the courage to use it. I loved the finished garment, but I still didn’t feel warm and fuzzy about the colour. I forced myself to wear it 3 different times in an attempt to become more purple-friendly. One time was lunch with my highschool girlfriends - they are always very complimentary of anything I wear, probably because they know I made it and maybe just to be nice, but they always say something. This time, nada! Not a word. Hummm....The last time I put it on, my son had taken me out for lunch on my birthday. He doesn’t normally say anything about anything that I wear but at the end of the lunch he looked at me and said, ‘That’s not your usual colour, is it? It seems a little bright for you.’ That did it! I was either going to have to give it away or burn it!
Now, several times lately, I’ve been meaning to experiment with over-dyeing a finished garment. The sour apple wool crepe deluxe of ‘Frill Ride’ (No 51) was going to be in line for the experiment, but Sue J at BT Yarns said she would wear it, so I gave it to her. Anyway, last week when I was packing up to go to the Knit Knack Shop’s Spring Fling in Peru, Indiana, I held up the purple thing and made a snap decision. I dashed to the grocery store and grabbed 2 boxes of RIT dye in navy blue - they only had 5 colours. I read the instructions...put on rubber gloves, got out my very big soup pot, put 8 litres of hot water in, heated it on the stove just a bit, maybe 5 minutes. Dumped in the dye powder from both boxes and a cup of regular table salt - I did debate for a second whether it would make a difference if it was kosher salt - I had a lot more of that on hand, but went with the regular - the water looked black! Threw in the purple peril, unbuttoned. With a old wooden spoon, ruined in a previous experiment, I stirred a bit, maybe 2 minutes total. It looked really black but that was okay by me. I took it off the heat and dumped it into the sink. Rinsed it several times in cold water, until the water was clear. The sweater still looked black. Then I washed it with ‘Eucalan’ like I normally would, rolled it in a towel to remove as much moisture as possible and laid it out to dry. The next morning I was ecstatic to see it had dried to a lovely deep plum.
The knitters in Peru were shocked and amazed!
Boy, do I have plans!
Posted by Mary Anne Oger at 3:53 PM 2 comments: