Today is cool, rainy and yucky! I was supposed to be going on a nice, long hike but that isn't going to happen. No better day to spend at the knitting machine!;-)
I got one sleeve done and you know I’m not writing this pattern, but if you want the sleeve schematic, just say – it turned out awesome! But spoiler alert, there is a lot going on here, especially for lace carriage knitting. I started off with waste yarn and the bottom edge has a curve in it which meant reverse shortrowing, ravel cord method. Once that was done, the side edges were decreased quite rapidly. I then shortrowed the underarm decreases to get that nice smooth curve on each side and at the top, there is a slight curve - you guessed it, shortrowed again. The top edge is finished on the machine before you take it off, like my neckline. The bottom edging, another one of my crochet-look trims, knit on the machine, is added after the fact. In the excitement of getting this done, I was tempted to just put it right on to the sleeve without testing it out first but held myself in check and did test it out on my swatch before adding it to the sleeve. On the swatch I did one half using 2 strands of main yarn for the chained picot part and 3 strands for the second half so I could decide which to use. I opted for the 2 strand side and it matched the width of the lace fabric stitch for stitch. I may stay up all night just to finish it off!
And I just remembered one of my classes in September for the seminar at Rocking Horse Farm is ‘making a statement sleeve’ – this will be a great addition!
https://www.facebook.com/pages/Rocking-Horse-Farm/229565593343
Posted by Mary Anne Oger at 3:59 PM No comments:

I am currently obsessed with sheer fabrics! And with those ‘bold shoulder’ sleeves! It’s almost Canada Day – not only Canada Day, it's our birthday, 150-year celebration!
I should admit I do remember the centennial - fifty years ago in 1967… there were centennial projects all over the place although I didn't do anything specific, must have been too young! ;-)
Now, we, in Canada have been hearing about the 150-year thing for almost a year and I have been thinking about it a bit - the other day, I had an epiphany! I could make a Canada Day sweater and call it 'Canada, Eh?'! It will be red and I could be finished it by Canada Day, maybe! Not that it really matters because it isn’t the sort of thing I’d be wearing on Canada Day for fireworks out in the boonies – for that I usually need an overlarge hoodie and tons of bug spray! But I can always show it off when I go to Monroe, Michigan for the 29th Monroe Area Knitting Seminar (so excited!) – you know how I always like to have something new especially for such an event! 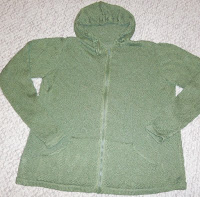 Mark your calendar! MAO is making a pullover! It doesn't happen often but that's what this is! I'm using my favourite yarn, Wool Crepe Deluxe which I have in passion red. After my  success of using the rayon yarn at a very loose tension with the one-row-tuck pattern (http://knitwords.blogspot.ca/2017/01/i-was-wrong.html) I wanted to try using WCD with lace at a very loose tension.
-actually, I don't think I told you but I had made the hoodie again using sage linen and gave it to my friend Cathy who loved it for the thinness and being so lightweight.

Normally, I would stockinette knit WCD at T5-6, getting a gauge of 33-34 sts and 50-54 rows to 10 cm and for lace knitting I would use T4 which results in a gauge of 31 sts and 50 rows (I'm using my Silver Reed of course and the lace carriage knits looser than the main carriage). To get the sheer-look that I want, I am using T7 (gauge is 25 sts and 40 rows!!!) and it's knitting perfectly. I am using the shape of 'Gossamer' -love the lace and the extended A-line which makes those dipped points at the sides (http://knitwords.blogspot.ca/2012/02/gossamer.html)  but making it a pullover instead of the split front of the cardigan – got the back and front knit perfectly, so happy! And look at that front neckline – it's beautiful even if I do say so myself!
Now, I'm going to draft the sleeve same as I did for my sewn dress (http://knitwords.blogspot.ca/2017/05/cross-training.html) from a few weeks ago…2 days to go!
P.S. Janet got her 'Sydney' and was pretty impressed! ;-)

Posted by Mary Anne Oger at 3:26 PM No comments: 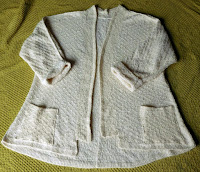 Putting together/seaming with this bouclé/slubby yarn was a real bug! The slubs make little knots and curl back on themselves, making casting off extremely painful! What I did and what I recommend if you’re knitting with a yarn like this is to use a smooth yarn in as close as a colour match as you can find to do the seaming. It also allows for easier darning in of the ends as they mostly occur at the beginning and end of each piece which means there is a chained seam of the smooth yarn that you can use to run the bouclé ends through. Other than this problem, this was a pretty quick knit but I’m not too sure of the final result. It is soft and cuddly and lightweight which is mostly what I was looking for and the yarn has very good yardage – I still have 155g left from the original 545g even though I had to make the front ‘bands’ twice (the second time because it laid/fell nicer with the knit side as the outside and there was no salvaging after they were attached! ;-)) - but I’m afraid that the finished garment biased slightly – when it’s on you don’t really notice it but it’s not a yarn I would go out looking for again which may be an indication of why it was discontinued…but I kind of like ‘Sydney’ – the shape is great - and I may remake it for myself with something else! You’ll be the first to know!

The day turned out quite nice weatherwise, the setting rustic, rural and fun and the food was great. The bride was lovely, the groom nervous and everything seemed perfect. About 11 pm it did start to cool quite quickly. My black Battenburg/Legacy  cardi [http://knitwords.blogspot.ca/2016/06/12-step.html ]was just right  with my dress and Shannon was exquisite in her wedding shrug. I was so proud and she did tell me she was looking forward to wearing it again many times because it is so versatile – much better than a shawl! ;-)
Posted by Mary Anne Oger at 11:35 AM 2 comments: 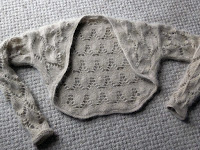 I finished! (http://knitwords.blogspot.ca/2017/04/whats-shrug.html )And it’s beautiful! And lovely and soft and so feminine! I can hardly wait to see it with her wedding dress! Got the second sleeve done and then all that needed to be done was make a band of the same edge as I used for the cast-on to trim the front edges and up around the back neck – I was able to do it in one piece and it looks perfect. 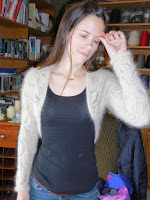 The wedding is this next weekend so Shannon came over to try it on and/or pick it up – she’s happy, her mom’s happy and I’m so pleased!!
I do hope to get a photo of her wearing it at the wedding so you can see how it looks with her dress but you know how these things go...

Finally getting around to working on ‘Sydney’ – I did make another swatch at one number higher, (T9, 24 sts and 48 rows to final washed swatch) and tested out my hem – I like  the simplicity of a full needle rib hem, especially when working with a wide fabric like this and on my swatch, I did a racked cast-on {http://knitwords.blogspot.ca/2016/07/aran-look-scarf.html} but after the laundering, I could see that it was rather wavy and messy looking so I opted for 6 rows of circular graded tension, followed by 8 rows FNR at T6/6 for the hem.
At the point where you need to begin increasing for the underarm/sleeve, to make it a nice, smooth seamline, set it up to reverse shortrow. With this stitch pattern and shape, I need to cast on over #72Left to #12Right of 0 – and there is fabric hanging on #13Right to #72Right – I don’t want to mess with having to re-read or download the pattern again. Here’s how: end with carriage at left and move the carriage over to the left side. Take the main yarn out and set it to the right out of the way. Bring the new needles to work and remember those waste yarn worms I told you about {http://knitwords.blogspot.ca/2017/01/confessions-of-waste-yarnaholic.html}? Take a long one and from the cast-on side of it, press it over the new, empty needles – no tool needed, just hold the edge up and push the needles through – you’re trying to hook the straight thread from the weaving cast-on over the needle and if there’s an extra stitch here or here, no big deal – it doesn’t matter, you’re just making something to hang the weights for the tuck patterning.
When you have that hung, bring the needles out and hang some bar weights on the waste yarn. Now, hand knit a ravel cord through – so you will be able, later, to pull this out to separate the waste yarn. After the ravel cord, bring the main yarn back into work and wrap the needles – same as the e-wrap, but this time, going from right to left.

﻿
Put the yarn into the feeder and knit the row - the patterning will continue on the right-side portion and you will get a nice row of stockinette on the new e-wrapped needles. With the carriage at the right side, place the left side (#72L to #11R) to hold (and set carriage to hold), knit, wrap, knit. ﻿﻿

﻿Return the next two needles (#9, 10R) to upper working position, knit, wrap, knit etc, shaping and bringing the new needles back as required. The carriage has been set to tuck throughout, the pattern is continuing and there are no extra ends to darn in from the cast-on or anything!
Oh, and at the end of the top of the shoulder-line (which is shortrowed also), normally I would say to knit a row of stockinette over all and remove on waste yarn so you have a full line of open stitches to make the seam with the front piece later but because this bouclé yarn is really quite fine and bubbly, I decided to cast it off rather than worrying about having to re-hang it from the waste yarn and the seam will be stronger because of it – and I’m doing reverse (outside) seaming on most of the pieces.

Notice in the photo of the two backs – the one on the right looks a bit smaller – that’s because I made it yesterday and the ‘rest’ overnight allows the yarn to relax and regain some elasticity. Both pieces are still much bigger than they will be after the final assembly and laundering to shrink to size.
Posted by Mary Anne Oger at 3:15 PM No comments: