Last week while I was playing with socks, I was also pondering how to elevate that Take a Turn pattern. After all, I wrote the pattern and called it Advanced Beginner (because of the extra detail and information included) and maybe somewhere I may have offered some changes or alternatives, like making it plain, without the cables, especially if you had not made a MAO pattern before.

I no longer have the original garment – must have given it away and I plan to make it again for myself but this one is for sister Janet, who is quite a bit shorter than yours truly and a bit smaller across the shoulders. In the original, there were cables across the back, all beginning at the same time for a straight, yoke effect. I’ll be honest, it was easier to write the pattern that way and get you used to the cables and tuck rib without having to write 6 pages…then once you mastered that, staggering the cables for the front was easier to explain. Also, in the original, the cables were all turned the same way, again easier to explain and reduces the chance of error. Bearing in mind I’m giving this away, I don’t want to go whole hog or anything but I think I’m in a good mind space right now to add a little extra so, on the Back, I went with the chevron effect and decided to turn the cables to the centre, so the left side of 0 goes left to right and the right side opposite.

I don’t think I’ve really shared this in detail before but when making something that has vertical lines, I try to plan it so that I get a full, straight line at the armhole side, after the shaping, where it goes straight up to the shoulder.  Making a size smaller than the first size (the pattern has nine cables across, spaced with seven plain stitches between) and because the shoulder width here was less, I’d end up with half a cable at the edge – not good. I respaced the cables with only five stitches between, counted them out, checked on the machine by pulling out the needles, wrote them down, before even casting on and I was golden! Somehow, in the actual execution, my enthusiasm got in the way of my careful planning and as I was about to add in the fourth cable, I realized that I only had 4 sts between the last two cables. Big swear, big swear! It’s wine time!

Next day, after tossing and turning all night, trying to convince myself to just complete it the way it was, I thought I could try to just undo those stitches - after all it was only 20 rows…Yikes! Nightmare city! Kids, do NOT attempt this at home! There were 6 stitches, but it needed to be moved out one stitch so there were actually 8 sts unravelled! 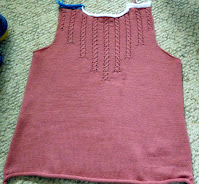 I was concerned about the underarm section, which in all my cleverness I had shortrowed and was worried about loosing that because I only needed to unravel halfway through that. If you’ve ever tried to unravel cables across the row, you know it is just as hard to un-cable! I should have taken my own good advice and either scrapped the whole thing or at least, dropped it off, unravelled back to the start of the underarm and rehung it. Would have been quicker. No worries! I’m just putting in time anyway, right?
Posted by Mary Anne Oger at 2:56 PM

OMG I would have at the point in your photo just ripped it out to the armhole. I commend you perseverance and patience. :)