Battle of the sexes... 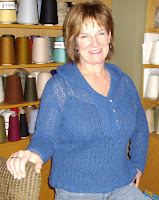 I usually take this time to do a little ‘practise’ and lately, I like to do a remake of my favourite garment from the last issue, sort of to get myself back in the knitting groove and just take it easy - for me, it’s almost like cheating, not having to think too much and just taking a ‘done’ pattern (not even making a swatch) and tossing it off, so to speak. Yeah, right!! So my pattern of choice is ‘Me-Cozy’ a lace pullover hoodie in alpaca. The one in the magazine that you’ll see soon is gray and I really loved it, but it looks much better on Lindsay than me. I had the same yarn in a denimy blue so I’m making it in the next size up - I must’ve been dreaming to think I’d fit that one!!
Okay, casting on is a snap - gave you some tips about that already - 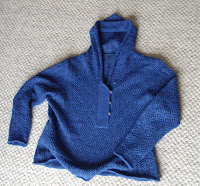 see ‘Wasted...not!’ And I’m cruising along, knitting lace. I glance down and notice that I have some strange but nice, vertical lines - not the pattern that I’d planned! Ooops! forgot to unlock the pattern and it’s repeating the same row - but it is pretty! So, okay, let’s go with this. I knit a total of 10 rows the same and then release the pattern. Works for me!! I'll call it a deliberate mistake - I love oxymorons - it’s only a mistake if you don’t know what you did - if you can repeat it, it’s a design feature!! How do you think I came up with so many new trims?
Now, I know this will be my favourite go-to garment for the next couple of weeks!! I just love it!!
Posted by Mary Anne Oger at 12:01 PM 2 comments: 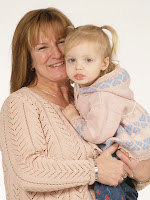 Happy New Year! better late than never, right? Anyway, been kinda busy, getting all my stuff done. Got No 48 off to press - it seemed so dragged out this time!! We had a photo shoot back in early December with only about 6 garments - someone wanted theirs back to give as a Christmas gift (you know who you are!!). I don’t usually make such rash promises, but I was caught off guard and I did agree so had to have an early shoot before everything was in and ready and then it was too close to Christmas to try and round up models and oh man!! I hate when that happens!! I knew I was getting a bit stressed when I woke up in the middle of the night and realized that I had completely forgot about sending renewal notices!! rats!! It’s a lick job, but someone has to do it! Whatever! it’s all done and I’m happy!!
What’s in No 48? Love & Kisses, Made to Match, Almost seamless, All-Aruffle, NVee, Blue Ribbon, Ultimate Poncho, Me-Cozy, Barely There, Spring Bling, Crosswise, Threeway, Dragonfly. Can you figure out what they are??
We have a ruffled wrap and a shrug on the mid gauge from Susan G. Eileen M sent a beautiful, hand manipulated lace top on the LK that she had made as a cover-up for her MOG outfit, as well as a shell and lace cardy in velveen on the standard gauge.
We have our very first Bond pattern, a great poncho thingy with sleeves from Michael Hale of Toronto. This is Michael’s first submission, he’s 77 and took up MK-ing as his retirement hobby. He’s planning on sending us something done on Passap soon!!
I did hoodies for Nathan, Rhiana and myself - not matching, and a couple of other cardys. 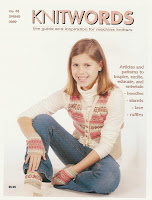 Evelyn McNabb’s ‘Spring Bling’ made the cover, a vest, wristlets and ankle socks - she designed it for her daughter, Hannah. Our model, Tyra, is such a little cutie and she is developing into a great model. She is a member of my son and daughter-in-law’s ‘Rafiki Youth Choir’, does Ukranian dancing and is a figure skater - not just another pretty face!
We also have Mar Heck’s very popular ‘Do it in DAK’ column with 20 questions (with the answers, of course), an article on lace carriage knitting and lots of other stuff to keep you inspired and entertained.
It will be in the mail for February first.

I even got my last year’s worth of bookkeeping done AND my office cleaned up and ready to go for another year!!

Oh, by the way, in all the fuss, I totally forgot that this is our 12th year anniversary!! Whoo-hoo!! Who woulda thought...
Posted by Mary Anne Oger at 3:52 PM 2 comments: