since you had a new machine? Oh my! Some getting used to! The stitch dial on my old carriage, it was so loose, I could turn it with the side of one finger. This new one, I almost feel like it needs two hands! Switching from stockinette to tuck, pay attention! Say nothing of the extra elbow grease to pass the carriage back and forth! Oh well, enough whining! It works! Did I mention that Mike’s yarn spray is my new best friend?
You may remember my problems with patterning and what I tried  - here’s the link if you want the story from mid February - https://knitwords.blogspot.com/2019/02/peanut-butter.html
In the end, I have a new, slightly-used demo machine, an SK840 (Studio) carriage that works on my old SK580 (Singer) needle bed and the electronics on the old bed (they were built-in) work with the ‘new’ carriage.
To get DesignaKnit to work, I was told by the North American distributor that I would need to purchase a new cable because my old SL4 would not work with DAK8. I do have DAK8 on my Windows7 laptop and was not really wanting to spend the money to get the new cable, mostly because all the old stuff works and I don’t really need DAK unless I want to download a large stitch pattern and knit-from-screen (last time I did that was for a picture baby blanket and I’m so over that! https://knitwords.blogspot.com/2017/11/ever-have-one-of-those-days.html).
When I was chatting to Mike at dknits.com and giving him my tale of woe, he told me he had a software upgrade that would allow the SL4 to be used with DAK8. OMGG! He mailed it to me, I did the install, easy-peasy! It worked! Mike is my new best friend!
Seriously folks, if you need help or are considering Designaknit or cables for whatever reason, call him!
Posted by Mary Anne Oger at 4:41 PM No comments:

as I was struggling...

to knit with this reclaimed Wool Crepe Deluxe, I thought back to another time. The following is my editorial from KNITWORDS  #13, March 2000: 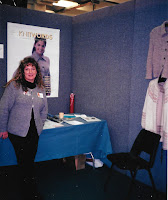 In January, I went to London, England and participated in the 'Knit, Stitch and Creative Crafts Show'. It was a lot of fun and very different from our North American knitting machine seminars in that it was mostly a selling show, not a lot of teaching like we normally have here. I had a booth next to Elaine Cater and I gave a 25 minute 'talk' once a day for the four days. It was a bit different without a knitting machine to hide behind, but it was kind of cool to have people come up to me and tell me they liked my Canadian accent. The first few times, I tried to tell them I didn't have an accent, but soon realized I was fighting a losing battle. One of the best things, I was in charge of what they call the 'knitting clinic'. It was twice a day for about an hour each time. It would be announced over the sound system that “Mary Anne Oger from Thunder Bay Canada, blah-blah blah would be in 'stand' 78” and anyone who had questions, problems or whatever about machine knitting could come and talk to me and it was my duty to either solve the problem or offer suggestions as to where the knitter might go to get help. By far, the most interesting lady was an 83-year-old, smartly-dressed machine knitter who told me a lengthy story about how she had knit a skirt from one designer's pattern. It had turned out so nicely that she chose a different designer's pattern and made a 'blouse' to go with the skirt but wasn't happy with the result. The fit wasn't quite right. She had knit it using 3 strands of a very fine bright acrylic (Bramwell’s Silky). I was politely listening to her story, waiting for the moment I could jump in and solve her dilemma. She began relating how she 'unpicked' this thing and put it into hanks. She then washed it and hung it to dry, adding weights to it to remove the kinks. Much to her dismay, when dry, it was still crinkly. By this time, my eyes began to glaze over, and I was clamping my teeth in an attempt not to scream out, 'throw it in the 'dust bin'!'. I managed to retain my composure and sanity as she then went on to say how a friend asked her if she had tried the microwave. My mind was gone! Gripping the edge of the table, hoping she couldn't see my white knuckles, I faintly asked, 'huh?' Anyhow, dubious herself, she then wound the used, crinkled yarn onto plastic cones, which she assured me, she fully expected to melt in the microwave (they didn't); added a cup of water and stuck in the 'mike' for 8 minutes. It worked out beautifully! Did I have any suggestions on what she could now knit with this reclaimed acrylic?

She then purchased one of my books and, finally able to speak, I asked her if she subscribed to the magazine. She, very politely, told me that she had seen a copy or two and didn't like it as there was nothing in it that was of any use to her.
After she walked away, I realized I hadn't found out whether the recycled yarn was still triple stranded or not.
Oh, by the way, the topic of my speech was 'The benefits of working with natural fibres.'
Posted by Mary Anne Oger at 12:11 PM 1 comment:

I mentioned re-making that EFK from a pre-knit project that I didn’t like. To get myself in the proper frame of mind, I did redo my LBD. I took some photos but as you may know, black does not show up well but it was a very successful, relatively easy project and I now have a new LBD! (happy, happy!)
﻿
With that under my belt, I bravely jumped into undoing the silver-gray Wool Crepe Deluxe. Now, don’t get me wrong – the ONLY reason I’m re-knitting this used yarn is because it is very expensive and rather than trash the whole thing, I’m opting for this salvage operation.
Re-using yarn that was knit in stockinette is one thing, but if it was knit in tuck or lace, and blocked or pressed, there is likely to be thin, possibly damaged spots in the yarn so this is not something to attempt if you’re short on patience and it’s not exactly foolproof. I’m offering a few tips to help you out if you need to do this. And, planning to re-knit in pattern is just asking for more issues so be sure of your skills!
Rewinding/unravelling yarn – put a little pressure on it to stretch the yarn out as you’re winding, to sort of straighten the yarn, (don't worry about the kinks, they will press out after the piece is knit) but also if there’s a weak spot in the yarn, you’ll want it to break now rather than halfway across the row as you’re knitting. If it does break while winding, I just tie a granny knot, leaving about an inch and a half ends, and then deal with it after the row is knit. I let the knot knit through and then un-pick the couple of stitches where the tails of the knot knit in, fix up those stitches, omitting the tails and then darn in those ends after.
Knit slowly! Trust me! The yarn is likely to break somewhere and if you’re moving slowly there’s a chance you can save the piece before it all drops off…like here (above), where it knit fine across the row and then the yarn broke and opened out. I was able to rehang the dropped stitches, rip back five rows, reprogram and re-knit again.
If you’ve stopped or paused, maybe to increase or decrease, pull up on the yarn at the beginning of the row so the kinky part doesn’t get caught in the brushes and cause a loop at the side or worse…
I knit the Back with the pre-used yarn and had enough un-used yarn to make the Front. This photo (above) shows each piece as it looked coming off the machine, no pressing on either piece. I’ll admit, the Back did look like a nightmare!
This photo (at left) shows the two pieces after pressing to size, shoulder line joined, and Sleeve made with pre-knit yarn.
Posted by Mary Anne Oger at 4:07 PM No comments:

when good gets better... 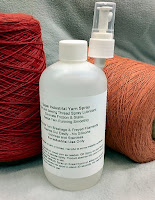 I forgot to tell you – when we were driving to Pigeon Forge, TN, back in March, I realized that a small detour would take us to Mike Becker’s shop in Aurora, Indiana. I had never been so called Mike to make sure he’d be there and made an appointment to stop by. It was fun, should have got a photo but didn’t think about it until we were back on the road. But anyway, we had a great visit, caught up on the news and as we went to leave, Mike said he had a gift for me. I felt a bit bad because I had nothing for him but quickly got over that feeling when he gave me a new bottle of his SIYS - I was so excited to see that it has a new pump button instead of the pistol grip trigger one. I could hardly wait to get home to try it out.
Finally got around to it last week ;-), made a pair of socks for nephew’s birthday – I use the yarn spray on the 2X2 ribbed section where you are grading the tension tighter to make sure the ankle fits snuggly, and this makes it knit like warm butter. Oh man, that little press-down button makes such a difference – it’s so easy to use, I love it – thanks Mike! https://knitwords.blogspot.com/2013/02/addicted-to-yarn-spray.html