I’ve been waiting to see how it’s going to look and there is a new website too!

www.knitstylemag.com is the new link. I sent in my garment back in September and then you tend to forget about it for a while. I was happy with my design but, like I’ve said in the past, I make it in a finished 36 bust size, so there is really no hardship in parting with it because it doesn’t fit me and the yarn was chosen by our new editor, Cari and I really didn’t like the colour, a tealy green, but that’s just me. You can check out some of my background story, ‘anatomy of a design…’ Sep 6/13.
In early December Cari sent me this photo of my cardi and I was totally impressed! She did ask me to keep it to myself until the magazine came out, so I couldn’t share it earlier. It looks great and the more I studied at it, I knew I was going to regret not having one. Thought about it on and off between my getting-ready-for-Christmas projects and was planning to get some yarn to make it – what am I thinking? I prefer standard gauge garments and I already have a stock of innumerable selections of suitable mercerized cottons to make it on the standard gauge. Yes, that’s the way I’ll go! I did a swatch of the drop stitch and it looked lame - actually the drop stitch is an easy way to make a lace pattern on the mid gauge, but with the Silver Reed lace carriage available why bother with a hand transferred technique. 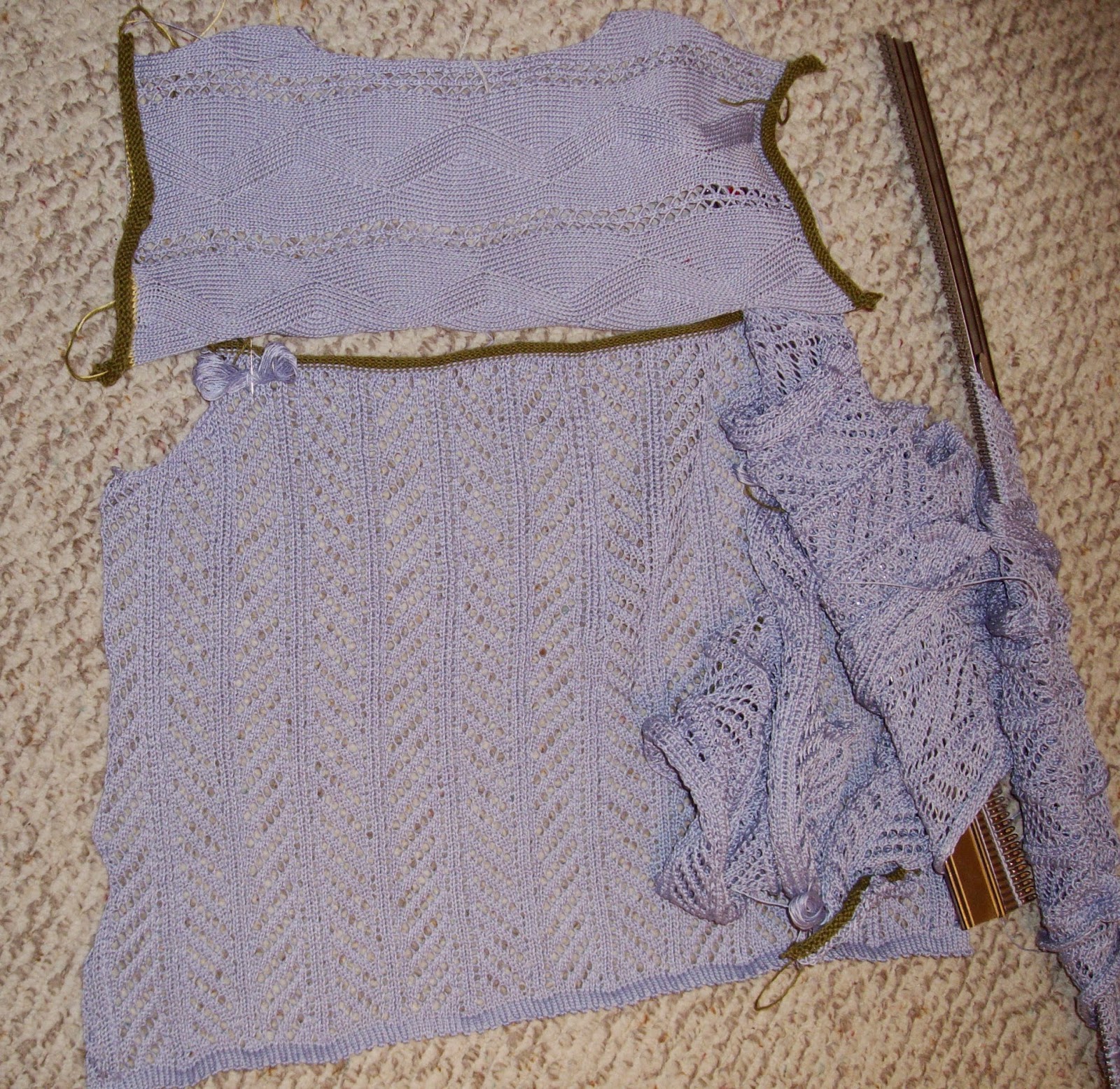 I did some hybrid knitting (see - Jan 16/13) – I used the lace stitch from No 40, ‘Lacy in Red’, the hem from ‘Borderline’, No 25, the shape from my KS design in my size, oh and the yarn I’m using is Yeoman Yarns Cannelé which is the same as 'Borderline' and I had done a remake of ‘Lacy in Red’ for myself using Cannelé back in ’08 so no swatches needed!!! I re-gauged the hand-transferred yoke stitch pattern, using a 7-prong tool for the waves so 2 repeats still looked good on the sideways knit yoke – just need to do the final putting together!
Did I mention they had a sucky name? ‘Lots ‘o Lace’ – I did try to rename it. When I sent in the pattern, I made a compromise and called it ‘Lace Waves’ – but it obviously didn’t take and you know what? Isn’t that apostrophe in the wrong place! LOL!

So, I was away, had a nice holiday and I come back and there’s, like, a bunch of messages, some asking for the minion hat pattern and they, like, wanted it for last weekend (I do feel really bad that I wasn’t able to get it to them in time), someone else was asking frantic questions about integrating shape files with stitch patterns, an OPP, BTW…and then a nice lady from PEI asking me about programming a lace pattern into her Brother 970. Seems she reads this blog and in the past, I offered an apology and a ’how to fix this’ (with a little help from Alice from ND) (see ‘hanging my head in shame’, Mar 21, 2012) about entering memo info into the Brother 970 CB1 box.
Basically, if you follow me, you know I’ve admitted to being somewhat biased in favouring my Silver Reed/Studio machines, but I have tried to provide the proper information for making my patterns and designs on Brother machines as well.
So, my PEI knitter writes (I know she is a good, accomplished knitter and won’t just be blowing me off) that she’s tried to enter a punchcard pattern, #18, into her machine, not to holey, blah-blah- blah, she includes a scan of the fabric (of course, it’s an OPP) she is trying to emulate – turns out the original was hand-transferred. I do not know what #18 punchcard looks like.
Then she says:
I thought I had the programming correct, following Page 44 of the instruction book and putting in N beside every lace row and 2 beside the 2 stockinette rows. However, when I finished and tried to enter it to knit, up pops a snide little "this is not a lace pattern" note on the screen, even though I indicated using the lace carriage. My original pattern was numbered 910
(sidebar: the  CB1 gives you the next number, starting at 900 for your own entered stitch patterns)
- should I give it a different number -  I can't see how to do THAT in the book!(no, you shouldn't) and I’m thinking, cripes, I thought she did a ton of knitting! My new entry pattern is at #950 and I’ve only really used this machine to test out lace patterns – gosh, does that mean I’ve done 50 lace patterns on this thing? sounds about right… Maybe it's not possible to adapt a punchcard lace pattern to the 970? Could you point me in the direction of an electronic lace pattern like the "Berry Crush".
I first send her a note asking if she still needs help because it’s happened in the past that I answer some involved question and they’ve already moved on…yes, she is still interested and awaiting my solution. Damn, maybe I should have just hit delete…I do some more unpacking and tidying up but this is starting to bug me – I do not have the answer off the top of my head and if she followed mine and Alice’s and the Brother instruction manual’s advice and still can’t get it…I know it means a trip to the machine (in the basement). Just before New Year’s I had a problem with my hot water tank and there is a bunch of stuff I had to move to get at the tank and it is laying on the floor, blocking the 970. (heavy sigh). Get the stuff put away  and gain access to the machine.
I take a closer look at her swatch, see it’s similar to SR#15, electronic, a 12 st X 28 row repeat and mess about with that. Enter it in DAK and print it out so it has big enough row numbers to read and go down the  2 flights of stairs and enter it in the CB1 box . It looks fine but when I go to air-knit it (no yarn, just passing the carriage) the lace carriage is screwing up and it’s not hitting the sensors properly to advance to the next row – drat! I can tell it’s because the sponge bar needs replacing – the needle butts are basically all over the place and the carriage is sitting too low to contact the sensor properly. I do not have a new sponge bar. Maybe if I cast on and knit for real it will work. Back upstairs, get yarn. Go back down, forget instruction manual. Up, Down. Forgot something to write with. Up, down. At least I’m getting some exercise…I remember she said about the punchcard thing, so I’m thinking, if that’s her problem, my SR pattern isn’t going to solve it. Back up, find a Brother punchcard lace stitch pattern in an old book  that is 8 st X 18 rows (#623) – the photo looks like exactly what she wants! Armed with the manual, the new stitch pattern printout, the punchcard book, the 970 Stitchworld book, printout of the blog, and pen, back down to the machine, saying to myself, ‘why the heck am I doing this??’ I can’t just let it go, I have to solve this! 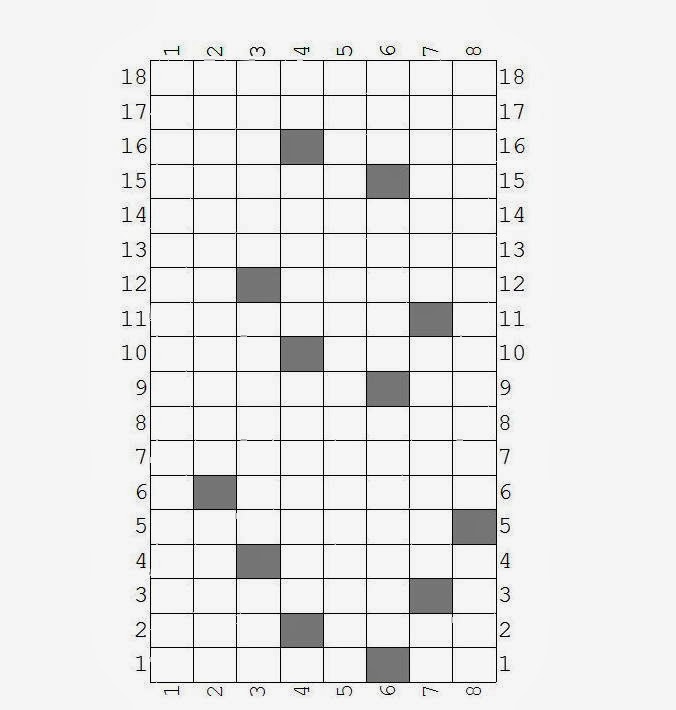 BTW, the brother instruction manual IS the crappola!! You have to go to page 33 for pattern creation, page 36 for modification and then you need to jump to page 44 for memo info input AND the example they give you has nothing to do with lace!!! WTH? so, I’m pulling up a built-in lace pattern and trying to see how that memo information differs – Ar-r-r-r-g-g-gh! 4 hours later, I have it!!

To enter the memo information, put '2' on row 8, 14 and 18 and 'N' on all other rows and it will work and it will recognize it as a lace pattern. So, the trick is, put a 2 on the even numbered row that is the end of the transfers, will indicate you are then going to knit 2 plain stockinette rows with the main carriage – the 2 plain rows look like they are entered in the stitch pattern but they are the 2 rows it take the lace carriage to get back to the left side after all the transfers are made - the stitch pattern does not advance when the main carriage is used. SO, the upshot is, any Silver Reed fashion lace stitch pattern can be used on the Brother electronic, as is, and you can add the memo info as above.
With a small feeling of satisfaction, I email Gill the good news – this morning, she messaged back:
EUREKA!!!!!!!  I did, and it did...knit, I mean! Can't thank you enough for that. The C.B. behaved like a dream and all is well.
Hope this helps someone else!
-your public machine knitting servant, MAO

I did get my Christmas knitting done! or at least the most important one. Here’s Rhiana on Christmas day with her doll and my outfits. She loved them - not sure whether the doll cared or not! Forgive me the poor photo - I got a new ipad mini for Christmas and obviously need more practise with it!

Anyway, what I did was a basic re-make of ‘Red Riding Ruffles’ from KW#52, Spring 2010 (at right) – I always liked that hoodie and she did too, -in fact I was able to lengthen the sleeves for her to get a bit more mileage out of it – that was easy, because the sleeve was knit down so it was a simple thing of opening the sleeve seam long enough to rehang the cuff edge and add another 2 inches – and she wore it until earlier this year - I think her Mom had to finally take it away!
This yarn was slightly lighter/thinner – Sirdar Crofter Baby Fairisle Effect DK, 50g/179 yds – I picked it because of the colour (0150), so totally her and also, when I was at the store, because it has a suggested gauge of 22 sts to 4 in/10 cm, I thought I might be able to make it on the standard gauge. But, after swatching at T10 on the 4.5mm gauge machine, I thought the fabric was quite firm and I knew it would take a lot more yardage than with a gauge of 22 sts. So, back to plan B – mid gauge which was what my original design was. I did have to re-gauge, but I use the knit radar/KR10/11 so no big deal and I wanted to add shortrowed gores to it, more like my ‘Swing Jacket’ from KnS#188 – I knew I wouldn’t find a doll zipper so was already planning on using buttons and the bands from the swing jacket. 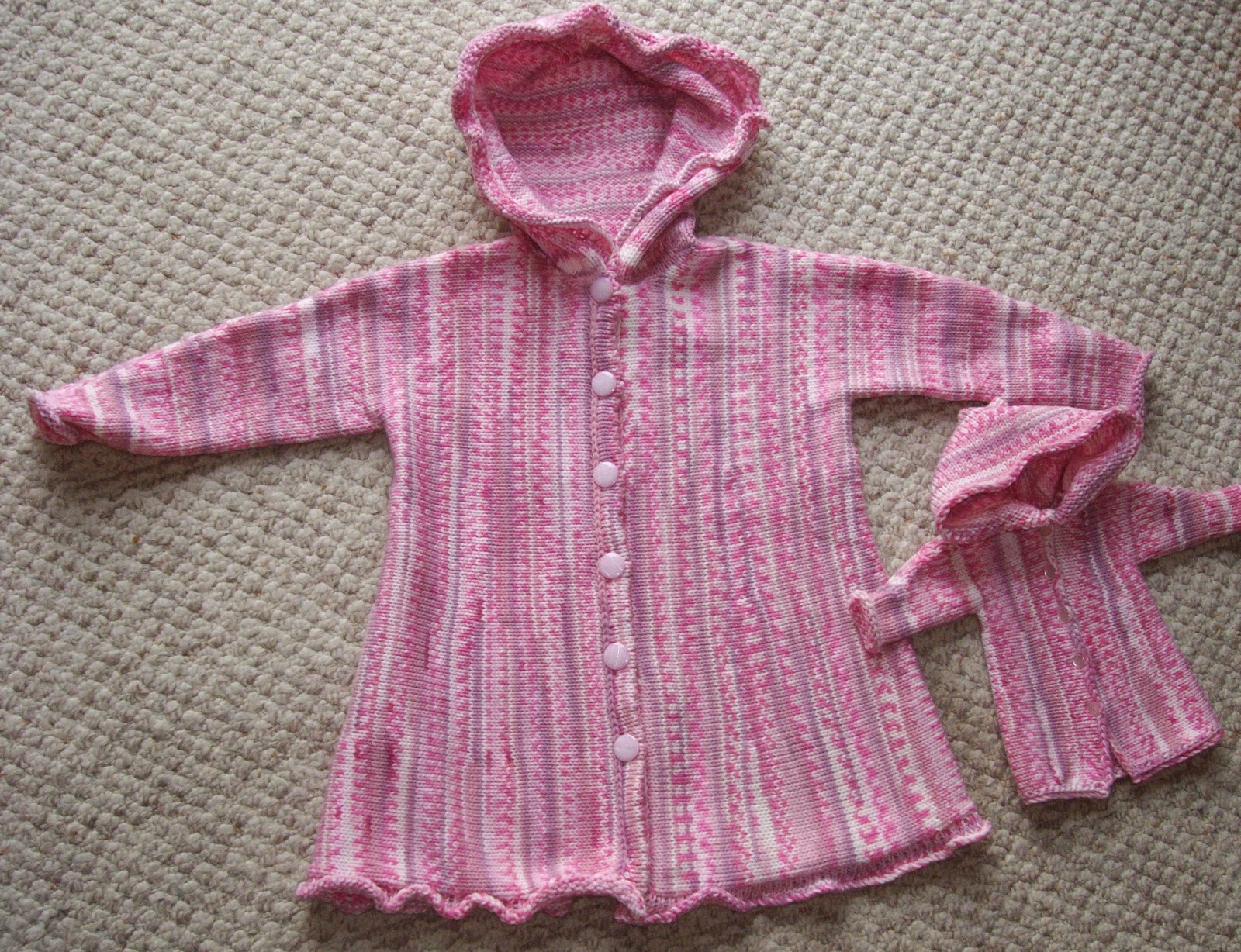 I added 7 gores, from the underarm point to hem (hold 20 sts, KWK, 3X; return 20 sts, KWK, 2X – 10 rows total at bottom edge), at  middle of fronts, side seams, middle of half of backs and centre back. Rhiana will be 7 yrs old in March and on the slim side, so I used the size 8 for length but used the size 4 for the chest and sleeve widths. For the doll, I had the old Michael’s 18 inch doll that I had bought to use as a model for the magazine and I measured it up and made a pretty close  version in that it was sideways with the gores and same style sleeve and hoodie that had to fit the doll’s head – I think it turned out pretty good – I made lots of notes so I could write it up if anyone was interested…7 balls and I have a small swatch leftover!