the importance of actually reading...

I told you about the WCD cardis that are in No 52 and how I was going to remake the green one for myself - well, I did do that, using that beautiful light olive colour I had. Now, here’s a perfect example of what happens when you don’t read the instructions because you think you know what you’re doing!
In reality, I made both of the ruffled cardis back in August last year. They were held over to this Spring issue because there were too many patterns to all fit in No 51 and those two were the most appropriate to hold over for the next issue. So, when it came to remaking this pattern, it was a case of - I wrote the pattern, I know what I’m doing! - or I thought I did anyway.
I did make a few changes - who doesn’t, second time around, but the changes actually involved using vertical darts in the body of the sweater - instead of shaping the garment by decreasing and increasing at the side seams, I did vertical darts, to test out my theories and to have another sample for some of the workshops I’ll be teaching this year. I have an article on darts in the new issue, called ‘Darting Around’, dealing with horizontal darts - used in the bust area - and vertical darts, in plain stockinette AND in patterned fabrics - be sure to take a look at it - you might be surprised. Anyway, I made this olive cardi with vertical darts using the garter bar to move stitches over after the decreases and increases - that part went well.
When it came to the bands, I vaguely recalled making quite a few swatches - the bands are knit circular on the double bed and there is a really cool chained edge to it that is actually started off with a very loose row on the cast-on, and chained after the piece is removed from the machine. Anyway, the buttonholes were a bit of a challenge - because of the circular - I think this is my first time to come up with a technique for my no-sew buttonhole that worked for circular on a horizontal band. So, now, I ‘skimmed’ the instructions, made the band, attached it and got the garment off the machine. It was only later when I was chaining the edge that I realized my clever buttonholes had failed! What the ??? I looked at Sue’s cardi (I haven’t given it up yet!!) and her buttonholes are beautiful! Mine aren’t closed up on the last side.
Now, I specifically recalled remaking her buttonhole band and rewriting the instructions - what happened?? I’m sort of panicking at this point - the magazine is printed and on it’s way to me - I can’t change anything!!! I went to the instructions printed from the pfd proof copy I got back from the printers that I used to reknit from - what a relief!! the correct instructions are there - I just didn’t read the whole thing, figuring I knew what I was doing - huh! After casting off the stitches for the buttonhole, I was supposed to bring out ONLY all the EMPTY needles, which would cancel the circular setting just for those needles and give me a zigzag over the buttonhole needles, which would then be lifted off and twisted to ‘e’ wrap back on - this is what closes up the second side of the hole - so watch out! Be sure to read all the directions and apply them in the proper place! Let me know how you make out!
Posted by Mary Anne Oger at 6:02 PM 2 comments:

It’s a new decade! What do we call it? - I’m going with ‘twenty ten’! We’ve come a long way and a lot has happened since Y2K. Did you notice we even have Paypal on the KNITWORDS website?
Knitting has come a long way from what the world thought of as something only grannies did to keep themselves busy - did you know there is an app for knitting that you can get for your iphone or ipod touch? It’s called ForgetMeKnit ($2.99, sites.google.com/site/kromsware) - I’d guess it’s actually for hand knitting, but I’m sure you could use it as a machine knitter as well - you can keep track of concurrent projects and save notes about each project. Of course, since I neither have a cell phone or even a plain ipod, I won’t be using it, but I have learned to never say never - who knows, I may even get on Ravelry one of these days!
We’ve wrapped up No 52 and got it sent off to print last night, so today’s a ‘clean up the office’ day - boy, I sure have a lot of jobs I don’t really like...stuffing envelopes for renewal notices is another biggie on the ‘do not like’ side...but somebody’s gotta do it.
Right after I get this done, I’m going to do something I do like - remake one of my favourite garments from No 52 - since you don’t know too much about what’s in there yet, you probably won’t be able to guess what it is, but I’ll give you a hint - it has ruffles, it’s a cardi and I made the original for Sue J at BT Yarns - I made sure to use a colour I’d never (there’s that word), trust me, ever wear - it was called ‘sour apple green’ and I think of it as wow, in-your-face-acid-green, but lots of people like it. Sue had it on sale and I was originally going to try and over-dye it, but when she said she liked it and would wear it, I made it for her and now I’m sorry, because I still want one, only not that colour, so...I do have a really pretty, my colour of green (olive, of course), WCD still on my shelf that I know I’ll get a lot of use from, so here goes.
I think I’ll break down and give you a little preview - I actually did 2 little cardi’s in WCD - that’s wool crepe deluxe in case you’re wondering - for No 52 following on the theme from No 50 when I had ‘Wild Side’ and ‘Flouncing Around’ (see ‘the same but different’ below) - then as now, I took the same basic shape, but changed up the bands and edges to show how it could be optioned to make it look quite different. One thing to note about these patterns, they are all interchangeable and you can take the size from one and make the other - for example, 'Peachy Keen' is sized for finished bust at 34.5 (38, 41, 44) inches and 'Frill Ride' is sized at 36 (39, 42.5) inches, which means there are 7 sizes for each 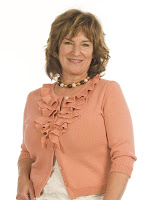 pattern, but I split them up so it would be easier to follow. So, in No 52 we have a fitted round-neck cardi, set-in sleeve with either plain bands and 1X1 rib for waist and sleeve edge or a very nice double bed hem with a chained edge that gives a more tailored look. Ruffles are all the rage right now, so, added bonus - two styles of ruffles that are hand sewn on the fronts so they can be removed later when everyone is tired of ruffles - or just plain don’t make them if you don’t like them - and you’ll still have a great little cardi that’s a true classic.
Hope you like!
Posted by Mary Anne Oger at 3:28 PM 2 comments: