Wrath of the MK gods? 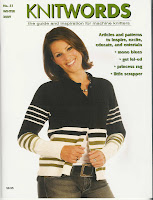 Well, I said I wasn’t superstitious...maybe I should be or maybe I spoke too soon. It’s probably just the machine knitting gods doing a little pay back. I haven’t said anything for a while, hoping it was just my imagination. BUT... now that No 51 arrived, safe and sound from the printers with no mixed up or missing pages, I can finally talk about it.
Not to alarm you, but it was touch and go for a while. Some things that were promised fell short at the last minute, but we had enough to fill the magazine, no sweat. Then it happened. Rick and I were in the middle of layout and we both had computer glitches - ohmigosh, talk about a little stress.
He had updated one of the programs we use for layout, to the latest and greatest. Everything was going tickety-boo and all of a sudden, the program kept shutting down. He decided to go back to the original program and I went home early. We re-convened the next night and I spent an hour watching his hunched shoulders and listening to ‘computer-speak’ as he vainly tried this and that to no avail. I went home early again, trying not to panic.
I had sent my desktop computer out the previous month to be tuned up. After getting it back it took a while for me to realize that although it was speeded up there were a few quirks, such as I was unable to burn a cd - it kept telling me that something was unhooked or missing...I had spent a bit of time trying to figure it out on my own to no avail. Needing to make some disks to go out in the mail the next day, I thought to use my newer laptop which had a cd burner but, the information was on the desktop machine. The cd drive on the desktop would read, just not burn with the program that was installed on it. I knew there was a drag-to-disc thing and attempted to use it. Having successfully loaded the stuff on a cd from the desktop, following instructions carefully, I took the new cd to my laptop, got the information installed on the laptop, and checked to see that it was there. Opened the cd record program, told it what to do and then went to eject the cd to put in a new, blank one - got a blue screen with a very scary message - I had heard other PC-ers describe this but never experienced it - the message said to shut down immediately, that everything was lost and if it failed on re-boot, oh well, too bad - or at least that’s what I thought it said. I tried to shut it down - nothing worked, just this awful blue screen with the same words over and over again. Because it was running on battery, I couldn’t even unplug the darn thing. I just left it bluescreening in the dark and went to bed.
Next morning, it was just sitting there, black. The battery had run out. I thought, okay, what’s the worst thing that can happen if I turn it on - it already told me it was done, so I had nothing to lose. I pressed ON and it booted up like nobody’s business and acted just like nothing happened. I burned my cd’s and went to the mail.
Meanwhile, back at Rick’s, he’d finally sorted out the problem and we were able to finish up No 51, leaving it a little tight at the printer’s end to meet our deadline. But all is well and we did it!!
Meanwhile, I realized I had made Nathan’s hoodie (Little Scrapper) too small - what was I thinking? - oh well,I’d make another - it was using leftovers so I didn’t even really think about it - Panama has great yardage, right? I did the back, the pockets, the sleeves and the hood and now, the fronts which are plain, are left and I’m down to the cone showing through and a swatch from his vest from No 49....this never happens to me!
You can see, the ‘happening’ (see below) made our front cover, renamed ‘Preppy’. Hope you like!
Posted by Mary Anne Oger at 3:16 PM 3 comments:

what I learned today... 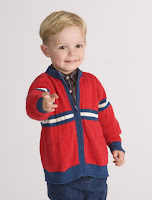 Well, maybe it wasn’t all just today. I had Nathan over last Saturday - we were supposed to go to a local farm for their pumpkin fest but it was raining, so we spent the day indoors. Anyway, the point is - Nathan had on ‘Nathanware’ from No 39, Winter ‘06. Although it’s close to getting a wee bit short, it still looks nice and what impressed me most was the zipper still looks really good, lays nice and flat and it works fine - he can zip it up and down, and start it, no problem. He’s now 5 1/2 and No 39 was 3 full years ago. Got me thinking! I examined the zipper and saw that it was metal. Strange, mostly I use the plastic ones because somehow I thought they were sturdier and although they always seem to end up with lumps and bulges after the garment has been washed a few times, I took that as just a fact of life - heck, even bought garments are like that! So, when I took him home, I asked to look at the other ones I’ve made him. Sure enough, all the ones with plastic coil zippers had buckled - the only other one with a metal zipper was nice and flat like this one, even though I always wash the garment and the zipper before putting them in. I came home and checked my sweaters with zippers and same thing - only the metal ones stayed flat. I had even taken some out and restitched them in an attempt to make them flat, but it never seems to work after the next washing.
So, guess what I made for Nate for this next issue? Yep, a hoodie, with pockets and a zip front! He loves hoodies and he loves pockets and I thought, okay, I can come up with another one, a bit different from any of the others, can’t I? (I’ve made him 9 different hoodies since No 29.) I did and he likes it - but he’s such a nice little lad that he’d act like he liked it even if he didn’t.
I had just put the zipper in and by co-incidence, the only zipper I could find locally was a metal tooth one that was just a bit too long - well, truth be told, the metal ones are much easier to shorten... 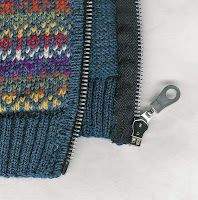 Use a thin, flat blade screwdriver to pry/loosen the top stopper on each side and gently pull it off - be careful not to damage them - use needle nose pliers to pluck off the extra teeth on each side and then replace the stoppers at the new top on each side, using the pliers gently to squeeze them back on. Leave the tape long - I just sew it along inside the neckline - if you cut it, it frays and it’s hard to sew it neatly if folded under.
Pin the zipper in place, making sure to match each side. I always handstitch the zipper (the garment and the zipper have already been washed and dried same way as it will be later on), with a stab stitch and sewing thread - so the stitching is invisible from the outside - close to the zipper teeth and then whip stitch the edges of the tape to the inside of the garment to stop it rolling in.

Final step, with the sewing machine, stitch up and down through the band and the zipper at the bottom of the zipper - it’s usually too heavy or reinforced with something, to be able to hand stitch through. It helps to begin sewing toward the bottom so as not to pull up the knitting from the bottom edge of the zipper.

Here’s Nate in his new hoodie (Little Scrapper) - what was I thinking? It’s too small! oh well, I have plenty of yarn to make another and this one’s sort of unisex, so Rhiana can wear it! They’ll be matching.
Posted by Mary Anne Oger at 2:52 PM 5 comments: