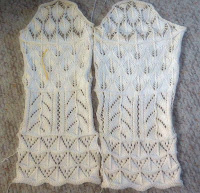 Rocking Horse Farm, that is! I just got a note from Jason with the schedule and did I have any changes to make? Yes, I do! I’m adding another new class on ‘shortrowing with ravel cord’ – I do this so much, I tend to forget that everyone may not be as familiar with it. I’ve heard from several people in the last couple of weeks with questions about using this method and there seems to be quite a bit of confusion, so, get ready! I did spend some time back in January blogging [https://knitwords.blogspot.ca/2017/01/life-lessons.html]

and photo-ing this in lace carriage knitting but what you may not know is you can use this for other stitch techniques or carriages that are not conducive to the regular holding position shortrowing. Knitweave, garter carriage, yarn changer, double bed stuff and yes, even the LK150 when doing manual patterning – the ravel cord method of shortrowing makes it much easier to get that nice, curved line on decreases, making finishing so much nicer, without fighting the needles in holding position.
I have lots of tricks for you!  And, I'm finishing up the pattern for the 'Church Pullover/Cardi' done on the LK150 that I promised Dee!
Jason and Carole do such a great job of their yearly seminar – they really know how to put out the welcome mat and make you feel special. Early bird registration is still good till Friday!  Hope to see you there!

https://www.facebook.com/knitshop.rockinghorsefarm
Posted by Mary Anne Oger at 3:12 PM No comments:

When I was in Munroe Michigan last week, I met Julie. At first she was just an attractive, attentive lady in the back row of my first class. I found myself talking to her and she was nodding appropriately like she agreed with everything I was saying. I had to keep reminding myself to look away and talk to the rest of the room! At the end of the first class, she came and told me she would be staying in my class because she had seen the other instructors several times and I was totally new to her. As the day progressed, we had little interaction – she wasn’t a question-asker, at least in a group, though she continued to be attentive. At the end of the day she came up to tell me she did a knitting podcast and would I allow her to interview me for it. I said yes, and the next day at the end of two long days of teaching we found a quiet spot and began talking. Oh my, I think I said, ‘you’ll probably want to edit this out but…’ several times. Anyway, we had fun – she is very calm, has a lovely speaking voice and seems quite thoughtful before she says stuff which I like. I have no idea what this will sound like when it finally airs but, fingers crossed! I hate the sound of my own voice and I kind of cringe when ever I hear a recording of myself so I hope it isn't as bad as I think!
When I got home, after the dust settled with unpacking and getting caught up I decided to check out her podcast and have a listen. She’s a vegetarian – I’m not but I do have some really good recipes – I can’t wait to tell her about what I can do with quinoa and kale! She comes from a large family (mine’s larger but not by much) and, OMG, her mom’s name is Ruthie! My mom was Ruth too!

She refers to her husband as ‘the spouse’ which I think is hilarious – maybe it’s a Canadian thing but I’ve always thought of 'spouse' as a generic term to avoid having to be specific as to gender and anyone I’ve ever heard use it is doing so in a slightly derogatory way. But he does sound like a real prize – I’m kind of jealous! She’s not afraid to admit she loves Judge Judy and tells us why and I look forward to her ‘likes and dislikes’. We have a lot in common!
I have listened to several episodes – I started at the beginning with episode 1 - and although there is sock machine and hand knitting stuff there that I don’t really care about,  as well as some machine knitting, the perspective she offers on life in general is what I’m hooked on – I love it!
I did listen to her last episode  from July 10, 2017 and she mentioned she would be going to the Monroe seminar and that I would be there…she pronounced my name wrong – ow! It’s Oh!Grrrr! just like Shrek. Hope she gets it right in the interview so I can still like her!
Give it a listen ;-), Bing (or google) ‘Julie Boylan podcast’ or ‘Hand Y Machine Knitting